The Visitation by Giuseppe Nicola Nasini

A baroque composition on a prepared paper.
The Visitation by Giuseppe Nicola Nasini.

Originally from Castel del Piano, a town belonging to the Duchy of Tuscany and traditionally associated with Siena, Giuseppe Nicola Nasini was born into a family of painters: his grandfather Giacomo and his father Francesco Nasini were active in the province of Siena, working under the influence of local painters.

Sponsored by the Chigi family, Giuseppe Nicola and his cousin Tommaso were sent to the Roman Accademia di San Luca at the end of the 1670s. Giuseppe Nicola also entered the Accademia Granducale delle Arti di Roma, whose patrons were the Medicis: he developed a graphic style inherited from Pietro da Cortona, although he did not learn it not from the master himself but from his best student and assistant Ciro Ferri, who was the director of the Academy in 1673-1688. In both academies he achieved high results and received numerous prizes. Following a brief period in Siena in 1685, where he participated in the creation of frescoed decorations for the Porta Camollia together with his brother Antonio, the artist made a three-year journey to Venice, again with his brother and with the cousin, during which he executed numerous works, nowadays lost. In 1689 Nasini moved to Florence to the service of the Grand Duke Cosimo III, as aiutante di camera and head of the Medicis’ collection of art. From 1690 to 1694, he created four paintings illustrating the Last Judgment for the Palazzo Pitti, now lost, and numerous church paintings and palace décors, particularly for the Palazzo Medici Riccardi, where he was able to study Luca Giordano’s impressive frescoes. He moved to Siena in the late 17th century and continued to paint prolifically. In 1716, he settled in Rome where, already famous, he was commissioned to paint the grand hall of the papal chancery and participated, with twelve other artists, in the décor of twelve oval niches of the nave of the basilica of San Giovanni in Laterano. One of his last Roman works is The Glory of Saint Anthony, a fresco painted in 1721-22 for the Holy Apostles’ church (SS Apostoli). In the 1720s, Nasini finally returned to Siena, where he led a large workshop introducing the Baroque manner of Luca Giordano to his hometown.

Cortona and Ferri’s initial influence remains detectable throughout his career in his graphic manner: vigorous and angular pen lines combined with strong wash and abundant white gouache highlights. His slightly sullen physical types and large, tumultuous drapes remained characteristic of his style despite ulterior evolutions. The most extensive collections of Nasini’s drawings are in the Municipal Library of Siena and the Uffizi in Florence. 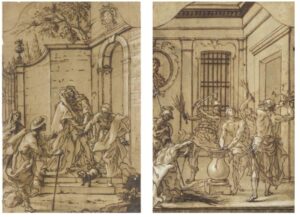 This impressive sheet is related to two other drawings of similar dimensions and techniques, illustrating the Visitation, like ours, and the Flagellation (Tajan Auction, 12th February 2015). They could be projects for altar paintings, the rounded shape of the upper part could indicate its future insertion into the decor of a chapel. They could alternatively have belonged to a series illustrating the Life of Christ, from Conception to Resurrection. Nasini executed two projects for the Visitation, an episode described in the Gospel According to Luke: Mary, pregnant with Jesus, visits her relative Elizabeth, herself expecting John the Baptist. As John in Elizabeth’s wombs become aware of the presence of Christ, Elizabeth feels it too and blesses Mary.

Of both versions, ours has the best composition. Nasini demonstrates his theatrical sense of narration and decor by putting both women on the porch of a vast palazzo while Zachary opens his arms to greet Joseph, seen from behind, their bundled belongings under his arm. Seated by the stairs, a begging lady and her child witness the revelation.