Hunters meeting in front of the Bonnant Cave

Louis-Albert-Guislain Bacler d’Albe’s military career began in 1793 when he joins the revolutionary army and meets Bonaparte, a gunner like him, during the siege of Toulon. As an officer, he was posted to the Italian army the following year and named official cartographer.  The future emperor follows Bacler d’Albe’s work and in 1796 commissions him to map the coastline from Nice to Savona. He participates in many campaigns, notably the Battle of Arcole. The general decides to put Bacler d’Albe’s draughtsman skills to use in creating propaganda and asks him to produce portraits and combat scenes. In particular, Bacler d’Albe creates battle scenes, many of which are kept in The Louvre, such as Bataille d’Arcole, 17 novembre 1796 (inv. 2397), Bataille de Rivoli, 14 janvier 1797 (inv. 2398) and Napoléon visitant les bivouacs de l’armée française à la veille de la bataille d’Austerlitz, 1er décembre 1805 (inv. 2399) (Napoleon Visiting French Army Bivouacs on the Eve of the Battle of Austerlitz, 1st December 1805)[1].

Bacler d’Albe enters Napoleon’s personal service in 1799 when his role becomes prominent – in 1804 appointed head of the Topographical Bureau. During campaigns, he shares Napoleon’s tent and works closely with the general in the development of both maps and military strategy: “He slept in his tent with his equipment and prepared the maps which he himself had coloured, marked the positions of the army corps with coloured pins, calculated distances with a compass, represented the topography of the terrain for the Emperor’s manoeuvering plans, advised on the means of attack….”[2] Considered one of the foremost cartographers of his time, Bacler d’Albe perfected the representation of relief through shadow play. He produced the first complete map of Italy (1797-1802) titled Carte du Théâtre des campagnes de Bonaparte en Italie (Map of Bonaparte’s Campaign Theatre in Italy), then the first homogenous map of Europe, known as “The Emperor’s Map”.  “Most of our engravers attached to the War Office owe their reputation and their talent to the care of our illustrious Artesian!”[3]

Before taking up his brilliant military duties, Bacler d’Albe, born in 1761 in Artois, settled in Sallanches in 1785, in the Mont Blanc region, busy drawing the marvellous sites before his eyes. Enthused by the beauty of the Alps, he stayed there for seven years: “Driven by a passion for painting on mountain peaks, he grasped the sequence and ramifications of these agglomerated masses and became, at the same time, painter and geographer.”[4] The artist asserts himself as a privileged witness to the evolution of the Chamonix, Saint Gervais and Sallanches valleys between the end of the eighteenth and the nineteenth centuries, when a revolution in tourism takes place due to Mont Blanc’s notoriety and its ascent by Nichel Gabriel Paccard and Jacques Balmat (whose portraits he painted) in 1786. During this period, Bacler d’Albe produced many views of the region, much appreciated by the public: “Between 1780 and 1800, he who sells the most in Savoy and Switzerland is Bacler d’Albe, constantly on excursion to take in new sites from the surrounding countryside, constantly visited by famous travellers.”[5] Between 1788 and 1790, he publishes 48 illuminated landscape plates of Haut-Faucigny and Mont-Blanc.[6]

A Memory of a Place 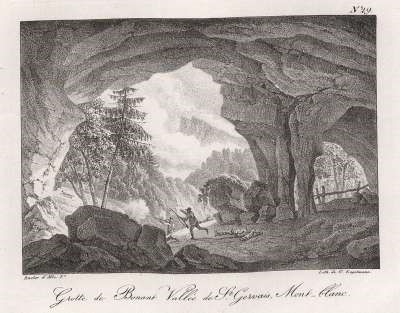 This delicate gouache executed in 1795 at the end of Bacler d’Albe’s stay in Haute-Savoie, presents the interior of a cave dug into the mountain range, at the entrance of which two hunters accompanied by their dogs, make a stop. The composition is similar to a lithograph titled Grotte de Bonnant Vallée de St Gervais, Mont Blanc (fig.1), engraved by Engelmann after a drawing by Bacler d’Albe for the work Souvenirs pittoresques du général Bacler d’Albe (Picturesque Memories of General Bacler d’Albe), published in 1818.[7] Taken from a slightly offset angle, the rock cavity opens onto a mountainous landscape from which two hunters chasing a fox emerge. The succession of planes guiding the spectator’s gaze to the hills in the background and the picturesque treatment of the rocks, the poetry emerging from the site, are imbued with the Pre-Romantic taste.

The Bonnant Caves that no longer exist today due to changes in terrain made by erosion and extreme weather, were to be found along the Bon-Nant torrent, a left bank tributary that flows through the Val Montjoie aux Contamines to a confluence at Saint-Gervais en Haute-Savoie. This place was a place of passage for travellers crossing the Joly, Bonhomme and Seigne passes. In the background, one sees the silhouette of mountains carved out of the blue sky that could be an evocation of the Aiguilles de Warens, visible from the Sallanches and Saint-Gervais valleys.

At the fall of the Empire, Bacler d’Albe makes lithography fashionable by executing hundreds of prints derived from the drawings he brought back from campaigns conducted in Europe between 1793 and 1814. In Sèvres he creates an art group in order to launch this new trend with the public, and publishes collections that consolidate his celebrity. Souvenirs pittoresques or Vues lithographiées de Suisse, du Valais (Picturesque Souvenirs or Lithographic Views from Switzerland, Valais) in 1810, Promenades pittoresques dans Paris et les environs (Picturesque Walks in Paris and its Surroundings) in 1822 and Souvenirs pittoresques de la campagne d’Espagne (Picturesque Memories of the Spanish Countryside) in 1824.

[1] His landscapes and battle paintings are numerous, placing him alongside artists such as Bagetti, Gros, Lejeune and Carle Vernet.

[2] Jacques Jourquin in Dictionnaire Napoléon, under the direction of Jean Tulard, Paris, Fayard, 1987.

[7] Copy kept at the Swiss National Library in Bern (code Kaf CH 82 Res). With the fall of the Empire, Bacler d’Albe returned to Sallanches and published an album of lithographs based on old drawings and landscape sketches, engraved by Engelmann.

Condition report: Very fresh gouache. Pasted onto card, slight abrasions around the edges; minor paper loss on the upper edge; attempted removal from support from behind in the upper right corner.