Born in Carcassonne, Jacques Gamelin began his apprenticeship in Toulouse with Jean‑Pierre  Rivalz in 1759, then in Paris in the studio of Jean-Baptiste Deshays until 1764. His protector Baron de Puymaurin encouraged him and sent him in Italy where he stayed from 1765 to 1774. Received at the Accademia di San Luca in Rome in 1771 as a “painter of battles”, Gamelin specialized in the representation of combat scenes, influenced by the painters Guillaume Courtois and Joseph Parrocel. Called back to Carcassonne in 1773, he left for Montpellier where he was appointed Director of the Academy of Fine Arts. After the Revolution, he was responsible for teaching drawing in Narbonne and organizing the Museum there. 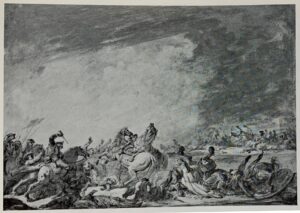 Our sheet illustrating a furious melee of cavalry in front of the walls of a city is undoubtedly a ricordo of the painting on copper entitled Combat de cavalerie, conserved today at the Musée des Augustins in Toulouse (Inv. 50-5-1[1]). This oil treated in shades of blue bears the artist’s signature accompanied by a date, the last digit of which remains illegible. A drawing[2] (fig. 1) in blue-gray wash heightened with white, of similar composition and dimensions, bearing the artist’s signature and the date of 1781, allows us to restore the missing number in the painting.

In this scene, the main role is given to the horses, placed in the center of the composition: two steeds stand without their rider already fallen to the ground. Violence is expressed by the exacerbated attitudes of men and horses intertwined in a macabre dance.

Jacques Gamelin produced many gouaches of combat scenes which were highly appreciated by amateurs of his time.