Portrait of a Little Girl in a Blue and Grey Hat by Pauline Carolus-Duran, née Croizette

Portrait of a Little Girl in a Blue and Grey Hat

Pastel and gouache on canvas. 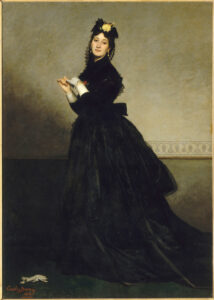 This elegant portrait of a little girl in a grey and blue hat staring at us so seriously, gives us the opportunity to devote a few lines to its author, Pauline Croizette – painter and pastellist married to the famous Carolus-Duran (Charles-Auguste-Émile Durant). Pauline was immortalised by her husband in the painting, La Dame au Gant (The Lady with the Glove), which made a strong impression at the 1869 Salon and still captivates the public today at the Musée d´Orsay. The sensuality of Pauline’s bare hand caressing the pearl-grey glove and the slight smile that dances on her lips contrasts with her haughty bearing, the austerity of her outfit – a silky shade of black ­– and her long, alluring figure. Such skilful balance is the key to the success of a painting that suggests fire underneath the ice, but without violating good morals.

More daring was Le Baiser (The Kiss, Lille, Musée des Beaux-arts), painted the previous year, where we see Pauline falling back into Carolus-Duran’s arms, allowing herself be kissed languidly. This is a rare and modern example of a painter depicting his own loving intimacy as a subject. In reality, who was the woman who inspired her husband’s model for a modern woman, a model thanks to which he would establish himself as the indisputable portrait painter of his time?

Granddaughter of French librettist and playwright Armand Croizette, Pauline had a romantic childhood. Daughter of Louise Fortunée Croizette, a French dancer at the Marinsky theater known under the stage name of Louise Carbonna and of an “unnamed” father whom family tradition declared a great Russian lord, she and her sister Sophie were born in Saint Petersburg. Both were brought up in France at the Grand-Champs convent in Versailles where they rubbed shoulders with Sarah Bernhardt. In her memoirs Bernhardt writes that, “Sophie was always laughing, and we especially liked going to the museum where her sister Pauline, who has since become Madame Carolus-Duran, copied paintings by the masters. Pauline was as calm and as cold as Sophie was loud, chatty and charming. She was beautiful, Pauline Croizette, but I liked Sophie better – gallantly pretty.”[1] While Sophie made a career in the theatre, entered the Comédie-Française and became Sarah Bernhardt’s most serious rival, Pauline devoted herself to miniatures and pastels. It was during a copying session at the Louvre at the end of 1867 that she met Carolus-Duran, recently returned from Spain where he studied the masters, particularly Velázquez who he admired as vehemently as his friend Édouard Manet. 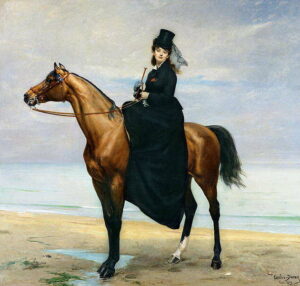 Love at first sight appeared immediate as the marriage took place on January 30th, 1868. They had three children together: two daughters, Marie-Anne and Sabine and then a son, Pierre. Carolus-Duran also painted his sister-in-law Sophie’s portrait, on horseback on the beach in Au bord de la mer  (At the Seaside, Musée des beaux-arts Eugène Leroy de Tourcoing). His images of the two sisters already embody a general comment that Théodore Duret made on the painter’s work several years later: “M. Carolus-Duran shows us […] a real type, a living woman – the woman of our times – as she has her own way of being and of appearing in all things.”[2]

An artist too, Pauline Croizette exhibited miniatures, paintings on porcelain and pastels at the Salon under her maiden name from 1864 onwards. She continued under her married name until 1875 before disappearing with the exception of a brief appearance in 1902. As was the custom, she placed her famous husband’s career and family stability before her own artistic practice. Despite her disaffection with the Salon in the 1880s and 1890s, Pauline never stopped drawing and there are several pastels by her hand in existence from these years such as her Portrait de Marguerite de Saint-Marceaux, kept at the musée municipal de Louviers and dated 1882, that offers an elegant and sober image of this influential salonnière and great music lover.

The portrait of a little girl that we are presenting also gives evidence of a great talent, undeniably influenced by her husband’s works and, through him more distantly, by those of Manet. Signed and dated 1879, the work does not give away the identity of its model. It would be tempting to identify the features of Marie-Anne, the artist’s eldest daughter who married Georges Feydeau – the large almond-shaped brown eyes, the arched eyebrows and the delicate bridge of the nose recall her more mature face in a portrait painted ten years later by Carolus-Duran, the year of Marie-Anne’s marriage to the famous vaudeville author. But the child’s hair that is slightly too blond, obstructs this identification as the eldest daughter of the Carolus-Duran couple appears to have been very dark-haired. In reality, this is more probably a commissioned portrait taken within the large social circle to which the couple belonged.

Pauline Croizette demonstrates her ability to treat silks and lace with brilliance, which was perhaps a habit borrowed from her husband? Despite some criticism,[3] Carolus-Duran had become the portrait painter of an entire society that unabashedly loved its exuberant fabrics and daring colours. It is logical that Pauline Croizette should also have tried such material effects since, as Jules Claretie remarks, “There is artistic blood in the family [···] and this is how we work – side by side in this vast studio on rue Notre-Dame-des-Champs.”[4] However, despite the attention paid to the silky outfit and grey ribbons, this little girl is portrayed without any affectation and her gaze falls on the viewer with a gravity that is ultimately sharply indicative of the artist’s direct and serious temperament. The excellent mastery of pastel, the science of portraiture and the effects of light and shadow leave us with the regret that Pauline Croizette did not have the opportunity to create a more abundant body of work.