A beautiful study for an iconic monument of Paris.

When in 1871 Charles Garnier, who had been working on the completion of the Opéra since 1865, asked Isidore Pils to decorate the grand staircase of the Opera Garnier, he was asking a well-established artist who was however more accustomed to “painting an entire regiment than the torso of a Venus”.[1] This was the artist’s last major work, which he managed to finish hardly two months before the inauguration of the opera house. He died a few months later. Having always been in poor health, it is likely that this final work finished him off. Despite his fragility, Pils had been a great traveller. In addition to the inevitable sojourn at the Villa Medici in Rome, he had visited the Crimea and the Orient where he had followed the French troops and had gone to Algeria from 1863 to 1865, just after his appointment as professor of painting at the Paris École des Beaux-Arts. A history painter who had trained under Guillaume Guillon Lethière and François Edouard Picot, Pils was equally interested in religious and current subjects, especially military ones, as well as, influenced by his travels, Orientalism. As a professor, he had many pupils including Clairin and Renouard who assisted him for the ceiling of the grand staircase of the Opéra and finished his work when he had to take to his bed, suffering from exhaustion.

The staircase proved to be the true “condensing” point of the project presented by Charles Garnier, who wrote about it: “The Opéra, it’s the staircase, like at the Invalides, it’s the dome, at Saint-Étienne-du-Mont, the rood-screen!”[2] Polychrome, comprising the most precious marbles, it is designed like a theatre and is intended for a public that is itself performing. Its steps hug the curve of the onyx balustrade and 30 marble columns accompany the viewer’s gaze towards the ceiling decorated in its four vaults with allegorical compositions painted on mounted canvases, lit by the skylight of a lantern. The subjects Pils chose to illustrate there, in agreement with Charles Garnier, are The Triumph of Apollo, The City of Paris Receiving the Plans the New Opera, The Combat of Minerva and Brute Force before Olympia, The Charm of Music. 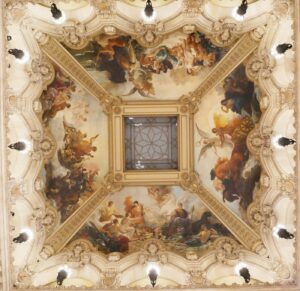 Our drawings is an initial sketch for the figure of the Seine which appears in the fresco of The City of Paris, however with considerable variations. The evolution of this motif can be followed by studying the various known drawings and preparatory studies.[3]

With an elegance evocative of Prudhon, this study is also an efficient working tool. The plays of light that vary depending on both internal and external sources, are skilfully handled using white highlights and reveal a fully mastered technique.

[3] A Study for the Seine on blue paper is in a private collection ; two oil studies on canvas of the same figure have been sold, one at Sotheby’s Paris on 25 June 2008, lot 30, the other by Tajan, on 25 March 2010, lot 149. The artist, as can be seen, sought the best position possible for this figure and its attribute (the jug). In the last one mentioned we recognize that the female model is the same one as in our two drawings.